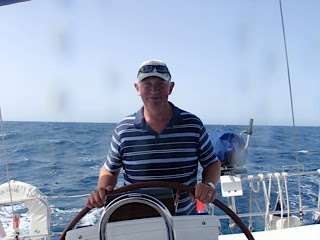 A new commercial sailing trip with Halcyon Yachts delivering a Jeanneau 43 Deck Saloon for a private owner from Brighton Marina to Corfu where the boat will be permanently based. The boat is about 5 years old and has hardly been used so is immaculate and very luxurious. 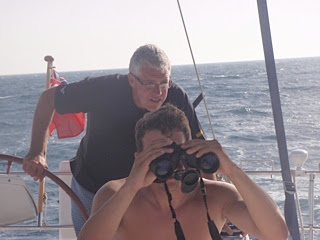 Skipper is Peter Ralphs a commercially endorsed ocean yachtmaster with a massive amount of experience. The Crew are Rob McKie an Ocean Science graduate who is going through a yacht delivery career development scheme and myself.  As we sail fairly constantly it is 3 hours on and 6 hours off as watch leader. 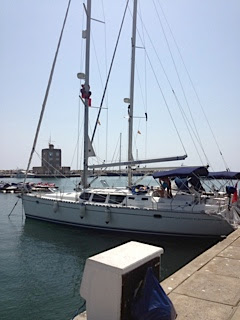 So armed with charts compass and state of the art GPS and even a sextant we set off to catch the tide and headed out of Brighton marina at midnight and to cross the English Channel dodging the big container ships in the shipping lanes bound for Alderney in the Channel Islands to catch The Alderney Races which are some of the strongest tides in the world to get a bit of a push through past Guernsey. 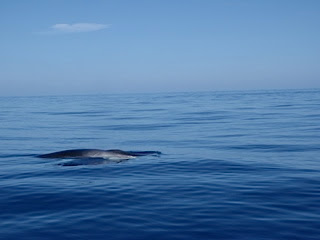 After rounding the Brittany Peninsula it was time for the big one – The Bay Of Biscay. That section is classed as an Ocean Passage as the route takes you over 200 miles from land. Amazing travelling far out to sea in the Atlantic Ocean with nothing between you and America. The water is 5000 metres deep and you sail off the continental shelf. Apart from a slight Atlantic swell it was pretty calm. Having heard so many stories it was a delight to have a smooth passage as we aimed for La Coruna in the top left hand corner of Spain. As we were becalmed on the 5000 metre contour line we had an amazing visit from a family of fin whales. As the big one circled it was beautiful and just really interested in the yacht Dolphins are plentiful and always playful but to be so close to a wild whale is a memory to be treasured. The whales live on the wildlife pushed up the big cliff edge. 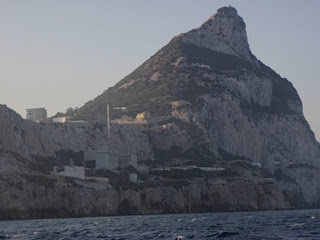 At 4.00 AM we arrived La Coruna Marina and berthed up. It is a lovely Spanish Town and the cruise ship Queen Victoria was in town so lots of Estuary English accents. The other yachties in the marina were mostly Brits and really friendly. I had breakfast with a really nice Spanish Lawyer called Gonzalo. Given I only know two people from La Coruna from my dealings with Zara it was amazing his father is Ramone and his uncle Amando – small world. He picked up on my Scottish accent as he spent 8 years in Edinburgh. Then a nice meal and some drinks ( the boat is dry) and stocked up on provisions and off again to sail down the Portuguese coast towards Gibraltar. As I learned from Gonzalo that Coast is the Coast Of Death. The highlight was meeting another charismatic delivery skipper who was the swashbuckling personification of Jack Sparrow from Pirates of The Caribbean. A fairly big British warship presence as Gibraltar is a source of tension. Frankly the Spaniards don’t care it is just the prime minister trying to deflect attention from the economy. 7 days to La Coruna and another 7 for the leg to Gibraltar.

Halcyon Yachts Ltd is a dedicated international yacht delivery specialist with highly experienced and qualified crew. For more information or to see details of their recent deliveries please visit https://www.halcyonyachts.com/